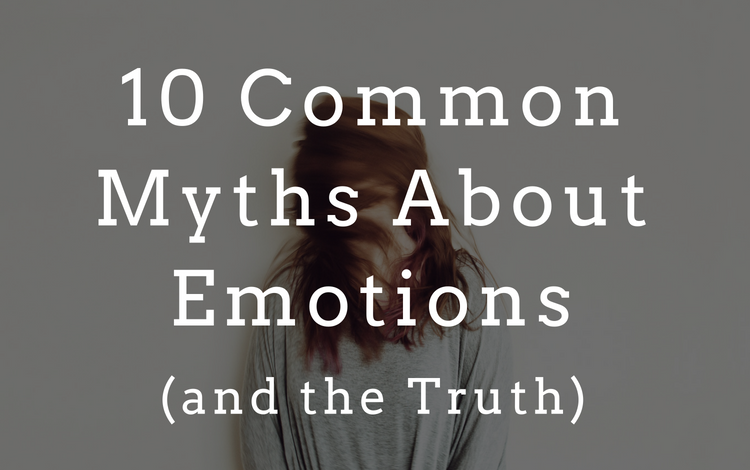 Emotions can be confusing and overwhelming at times – and common myths about emotions can make things worse.

Some myths imply that you should be in control of your emotions at all times. Other myths equate emotions with the truth of who you are.

Growing up, you may have learned that certain emotions mean you are selfish, overreacting, or weak. Or you may have gotten the message that you were too emotional and that if you just tried harder, you could control your emotions.

Myths like these create unnecessary suffering and make it harder to manage painful emotions.

Here are 10 common myths about emotions that we see in our San Francisco therapy practice—and the truth about them.

Myth #1: Having strong feelings means I am out of control.

Often people conflate the two, fearing that strong emotions will lead to impulsive or self-destructive behavior.

In the above examples, it’s the ACTION that led to feeling out of control, not the emotion itself.

Remember, you can feel deeply and not be out of control. Therapy can help you learn to decouple strong emotion from the action so you can respond wisely to painful life situations, rather than reflexively react.

Myth #2: It’s wrong or inauthentic to change my emotions.

TRUTH: As humans, we all regularly experience emotions that we try to change. That doesn’t mean we are not being true to who we are. Rather, we are working on changing emotions that aren’t effective.

For example, if you are terrified to fly but you want to see your friends and family who live across the country, you will work on changing the emotional response of fear.

Or perhaps you are scared to go on an interview but you want and need a job. To succeed, you work to reduce your fear so you can show up as your best self.

TRUTH: Sometimes strong emotions are based on our interpretations of events, rather than the event itself.

Therefore, it’s tricky to put so much weight on your emotions. Especially if you are very sensitive or emotional. Just because you feel something doesn’t mean it’s the truth.

Some people who are very emotional create an identity out of their emotions. Or they think that their strong emotions make them special, cool, or better than others. But it is nearly impossible to have a stable sense of self when that sense is resting on something as variable as changing emotions.

Myth #4: Some emotions are stupid.

TRUTH: This is one of the common myths about emotions that can really stifle you. Believing any emotion is stupid—especially the emotions that make you feel vulnerable, such as shame, sadness or fear—is a way of invalidating yourself and your own experience.

For example, if you feel sad or angry about not getting chosen to lead a project at work, you might bottle it up or push it down so you look like a team player. You might judge yourself for feeling sad or angry and wish these kinds of things wouldn’t bother you so much.

Or, when a potential romantic partner decides they don’t want a third date, you might convince yourself that it’s not a big deal rather than feel the pain of loss.

Myth #5: Other people know better than I do what I feel.

TRUTH: Ultimately, you are the final say. Only you can really know how you feel.

Although, if you’ve been invalidated often, it may be easier to look to others to tell you what you feel. Being validated means that others have acknowledged your feelings as worthwhile rather than ignoring, judging, or rejecting them.

Also, if your emotions are confusing to you, it is sometimes easier to rely on what others say about what you are feeling.

Myth #6: I need to be very emotional to be creative.

TRUTH: Often strong emotions, after the fact, can inspire works of art of all kinds. But in order to have the discipline to see your creative projects through, you will need access to your wise mind, which is the synthesis of emotion and reason.

Without the reasonable or rational part of you on board, your emotions may be great fodder for creative material, but it will stop there. It will be nearly impossible to complete that song, painting, or short story on emotions alone.

TRUTH: Avoiding grief or sadness doesn’t actually make it go away. It’s still there in the background, bringing you down.

Many people we see in our therapy practice struggle with being unable to feel their grief or sadness and do all sorts of things to avoid feeling pain.

Some common ways of avoiding grief and sadness include:

The trick to feeling emotions that you worry might overwhelm you is to feel it them in small doses so you don’t feel like you’re drowning in painful emotions.

A therapist is the perfect person to guide you through that process so you don’t have to go it alone.

Myth #8: Emotions happen for no reason.

TRUTH: There is always a reason for emotions. Even if you aren’t aware of the reason.

For example, imagine you feel sad all of a sudden while standing in a store smelling a vanilla scented candle. Earlier in the day, you were feeling fine. Now you just want to go home.

This is because the scent triggered a memory—just below the surface—of your grandmother’s house that smelled of vanilla because she loved to bake.

Often memories and associations from the past happen outside of conscious awareness, leading to the sense that you are feeling something for “no reason.”

Myth #9: It’s better to be rational than emotional.

TRUTH: We need our emotions! They make us react quickly in the face of danger, help those in need, and motivate us to form intimate relationships.

Ask yourself what the world would look like if you didn’t have emotions:

Usually, what people mean when they say that being rational is better than being emotional is that they don’t trust their emotions to not get them in trouble. They may have had the experience of being so emotional that all reason flew out the window.

Again, we need a synthesis of reason and emotion to be our best selves.

TRUTH: Every person is so much more than their emotions, even when they are highly emotional or sensitive people.

Our emotions are always in flux, continually changing like the tide. It’s not uncommon to feel more than one emotion at once. And often, these differing emotions fuse together.

For example, you might feel angry and sad at the same time over the same thing. As you pulse between emotions, it can be difficult to pin one down long enough to call it your identity. This results in a feeling of constant wavering, being uncertain of who you really are.

Remember, if you feel like you are your emotions, it will be very hard to have a stable sense of self.

*Do you need help understanding your emotions?

Call (415) 310-5142 to get started with therapy in San Francisco. We offer individual therapy, couples therapy, and adherent DBT.

Posted in Emotions, Individual Therapy and tagged advice, emotions, myths, therapy, tips
← Fog and Depression: How to Survive Summer in San FranciscoWhat Is Rest? – More Than Time Off from Work →